Ok, so here is the final robot being operated using Rviz and Moveit packages of ROS. The nice software from ongdexter made it easy to get the AR3 working.

But before I got here, there were several challenges. I wrote about some of those in an earlier post: A 3D printed Robot. For example, sourcing the components from all over the world, struggles with the 3D print settings, fixing bearings, set screw troubles etc. Once I was past those hurdles, I had a robot which worked in open loop mode if I used the default software from the AR3 website. But there were still several issues to sort out.

Firstly, I had not secured the robot to the ground and it tripped over when I moved the robot to a certain position. A spindle broke and I had to reprint the part allowing me to run the robot again. The robot is quite heavy as well and hence I gave it some wheels.

Secondly, the encoders were giving wrong values and I had to figure out the issue. I tried to debug the issue with the Python application in the AR3 website. But that turned out to be a monolithic piece of code of 8000+ lines. It really was not to my taste. Then I found a nice software from ongdexter which integrated the robot hardware with ROS. This allowed me to use MoveIt, RViz and other nice tools from ROS. With the power of ROS, I debugged and easily fixed the one encoder that had its lines swapped.

A useless but absolutely satisfying project finally comes to an end. 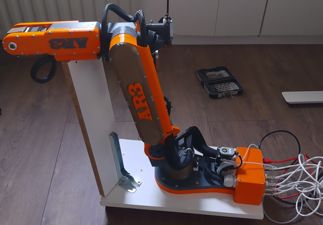